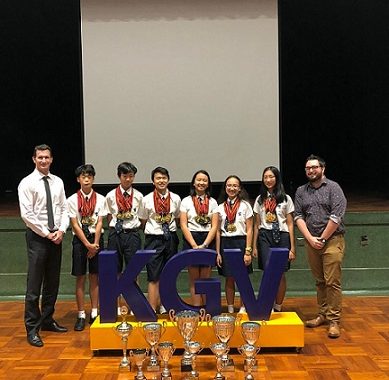 From 8th-12th November, two teams of three year 10 students each participated in the Junior Division of the World Scholar’s Cup’s Tournament of Champions, competing at Yale University against over 450 other teams of 1400+ scholars from 60 different countries/regions.

The World Scholar’s Cup is an annual academic tournament featuring three eliminatory rounds culminating in the Tournament of Champions taking place at Yale University. The competition requirements feature a syllabus spanning a wide range of topics over six subjects and nurture skills in writing and speaking through team debates and collaborative writing.

The students finished this round with outstanding achievements, including but not limited to individual results such as 3rd place in writing (Isaac), 2nd and 4th for the Scholar’s Challenge (Katherine and Ran respectively), and four Champion Scholars placements. The boys’ team came 17th overall, having placed 3rd in writing and 10th in Team Challenge. The girls’ team placed 1st in Team Challenge and 3rd in Bowl, and were crowned the overall champion team of the competition, a massive achievement. Collectively, the delegation left the final round of the competition with 74 medals and 10 trophies.

“The World Scholar’s Cup has opened our eyes to new horizons of approaching learning. Most importantly, we have learned how to be our own remarkable during this course of this competition.”

Welcome and please be advised that ESF uses cookies. By accessing an ESF, ESL or PTA web site and other online ESF services, such as ESF’s mobile app, users agree that ESF can store and access cookies, IP addresses and use other methods in order to collect website usage data, and improve user’s online experience. By continuing to access this web site, users agree to the use of cookies, which is handled in accordance to the ESF Data Privacy Policy. Information collected via cookies is handled in accordance with the ESF Personal Data Handling Policy and its related Personal Information Collection Statements (“PICS”). A copy of the PICS can be found on the ESF web site

Welcome and please be advised that ESF uses cookies. By continuing to access this web site, users agree to the use of cookies and the information collected by them by ESF.